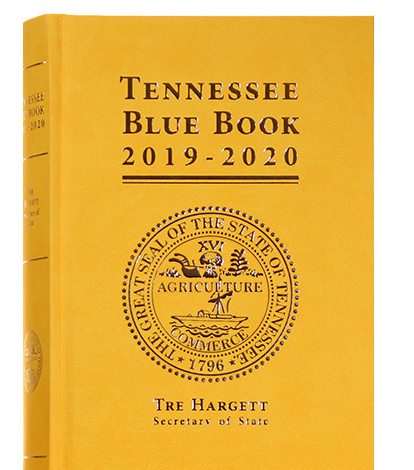 Initially introduced to Congress in 1878, the 19th Amendment was not submitted to the states for ratification for 41 years. On August 18, 1920, Tennessee became the 36th (and final) state needed to ratify the 19th Amendment, thereby making women's suffrage legal in the United States.

"This commemorative edition honors the steadfast efforts of Tennessee suffragists and the pivotal role Tennessee played in ratifying the 19th Amendment to the U.S. Constitution," Secretary of State Tre Hargett said. "It is fitting to dedicate our state's official historical reference, the Tennessee Blue Book, to this significant milestone."

The cover of the 2019-2020 Tennessee Blue Book is yellow, honoring the symbolic color of the national women's suffrage movement.

The 2019-2020 Blue Book, published by the Secretary of State's office, is available free of charge to any Tennessee resident through members of the General Assembly or the Division of Publications at (615) 741-2650 or publications.information@tn.gov.

Previous editions of the Tennessee Blue Book can be viewed at sos.tn.gov.