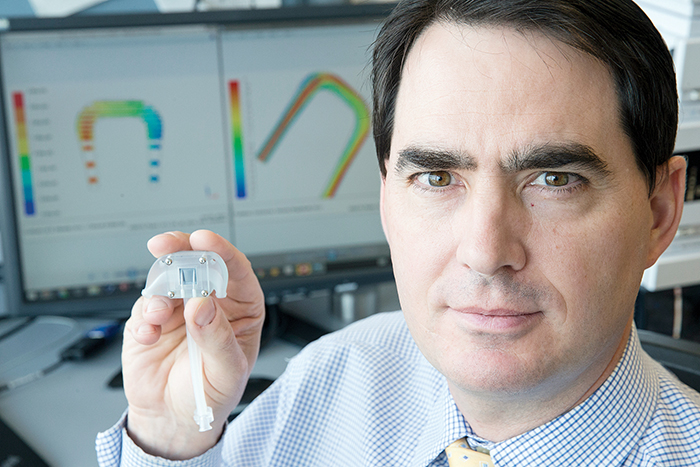 The path to nephrology was far from traditional for William H. Fissell, IV, MD, associate professor of Medicine at Vanderbilt University Medical Center and medical director for The Kidney Project, a national research initiative with a goal to create a small, surgically implantable, free-standing bioartificial kidney to treat end stage renal disease.

The New York native attended the prestigious Massachusetts Institute of Technology. However, his plans to study computer engineering succumbed to an interest in physics while developing telescope instrumentation for NASA's Chandra X-ray Observatory.

During a particularly difficult period for the college junior, Fissell took a leave of absence from MIT and witnessed a car accident while visiting a friend in Houston. "It occurred to me that I was getting this fancy MIT education but had no idea of what to do for this injured person," he said.

That awakening led Fissell to enroll in an EMT class back in Cambridge, and he soon found himself responding to 911 calls and transporting medically fragile dialysis patients in the slums of Boston. "Over time, we got to know the patients pretty well, and one had such severe bone disease from dialysis that she wore a metal halo to hold her skull off her shoulders," he explained.

Fissell went home to New York for the summer but returned to Boston that fall and found himself transporting the same woman, who graciously asked about his summer and his dating life. "I had this lightening bolt moment - that this woman who was in constant pain and humiliation is able to be warm and social and personable and interested in others," Fissell said. "I knew if she could do that, I could do anything."

He returned to MIT to complete degrees in physics and electrical engineering and soon was accepted to medical school and an accelerated residency program at Cleveland's Case Western Reserve University.

While studying for his boards, Fissell had another lightening bolt moment - one that would change the trajectory of his career ... and quite possibly the treatment of kidney failure. "I looked at a picture of kidney filters, and it struck me that they have the same size and shape of the diffraction gratings used in NASA's telescope," he explained. "I wondered if we could use the same technology toolkit to treat kidney disease."

In yet another "serendipitous moment," Fissell soon struck up a conversation with a stranger during his wife's office party. As luck would have it, that stranger was Shuvo Roy, PhD, a silicon nanotechnology expert at The Cleveland Clinic who had recently produced slot-shaped membranes for drug delivery. Unbeknownst to Fissell, that meeting would launch a research partnership now 20-plus years old.

In 2012 Fissell was recruited to VUMC from The Cleveland Clinic, while Roy went on to work at the University of California, San Francisco, where he continues serving as technical director for The Kidney Project. The initiative now includes more than 20 researchers working to give end stage renal disease patients new hope beyond the short-term solution of renal dialysis and the longer-term, but impermanent, solution of a living kidney transplant for which donor organs are limited.

The bioartificial kidney, the size of a coffee cup, consists of two modules that work together to get rid of waste. First, a hemofilter module processes incoming blood to create a watery ultrafiltrate that contains dissolved toxins, as well as sugars and salts. Second, a bioreactor of kidney cells processes the ultrafiltrate and sends the sugars and salts back into the blood. In the process, water is also reabsorbed back into the body, concentrating the ultrafiltrate into "urine," which will be directed to the bladder for excretion.

"The first 10 years were spent entirely on silicon membranes, and now we're far along in terms of successful implementation, function and biocompatibility," Fissell explained.

For the past five years, the Vanderbilt team has been learning how to successfully culture living kidney cells to accomplish their function in a bioartificial kidney. "We're asking the tough questions people haven't needed to ask before about why cells act like they do in the dish versus in a person, but we've made progress," he said.

And while other researchers focus on advances in wearable devices or stem cell growth of new kidneys, Fissell said The Kidney Project is a hybrid between present and future. "We don't have a lot of science left to answer," he said, noting his current challenge is raising necessary funds to get the device to the FDA for human trials.

"Right now, the only thing we can offer kidney failure patients is 40-year-old dialysis technology that's imperfect. In 15 years, we've moved from answering science questions to developing engineering solutions that don't require blood thinners, immunosuppressants, pumps and wires. We just need cash to implement it, and we're working as hard and as fast as we can," Fissell said. "A patient's well-being shouldn't be held hostage to an uncertain calendar of discovery science."