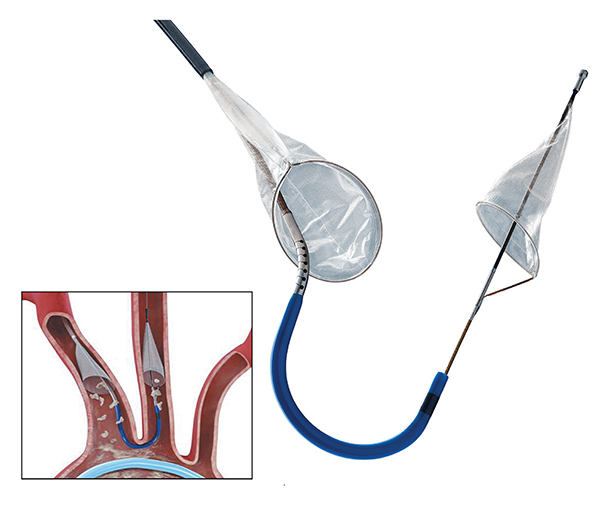 Surgical aortic valve replacement (SAVR) has been the standard treatment for symptomatic aortic stenosis; however, many patients were considered too high risk for SAVR and were left untreated. Over the last few years, transcatheter aortic valve replacement (TAVR) emerged as an alternative to SAVR and the procedure of choice for patients who have a prohibitive surgical risk and more recently found to be equivalent to SAVR for intermediate risk patients. TAVR, a minimally invasive, catheter-based procedure, has now become the first-line therapy for severe aortic stenosis in this patient population. Several clinical trials are soon to be reported comparing TAVR to SAVR in even the lowest risk patients.

The advantages of minimally invasive TAVR are significant; however, no procedure is without risk. Periprocedural stroke is one of the most devastating and feared complications because of its associated severe disability and higher mortality. The risk of stroke is confined mainly in the periprocedural and 30-day period following TAVR. Early stroke is mainly due to debris embolization during the procedure, whereas later events are associated with patient specific factors.

While newer generation TAVR devices and improved implant techniques are associated with a lower risk of stroke after TAVR, the incidence is estimated to be between 2-4 percent. The risk for post-procedure stroke underscores the need for patients to be treated at an experienced TAVR center, where studies show stroke rates are lower. TriStar Centennial Heart & Vascular is a large structural heart referral center led by a team of specialists who have significant experience in treating even the most complex heart disorders.

Despite the fact that the rate of clinical stroke has been constantly decreasing compared to initial TAVR experience, recent post-TAVR MRI studies suggest that new ischemic lesions may occur in as many as 80 percent of patients. These lesions are associated with a reduction in neurocognitive function.

Stroke prevention strategies during and after TAVR becomes all the more important as TAVR expands its indication to lower surgical-risk patients. One such strategy was the development of innovative embolic protection devices designed to block the debris from migrating to brain during the procedure.

The US Food and Drug Administration (FDA) recently approved the Sentinel Cerebral Embolic Protection System, which is the first FDA approved device specifically designed to address the concern of stroke during TAVR. TriStar Centennial Heart and Vascular Center is the first TAVR center in Nashville to adopt the new device commercially as an emerging standard of care in the U.S. to protect patients from the risk of stroke during and immediately after a TAVR procedure.

The Sentinel system consists of two filters that are positioned in the innominate and left carotid arteries through a catheter inserted in the right wrist. The filters are deployed prior to the TAVR procedure to capture any debris, calcium or thrombus before they can go to the brain and cause a stroke, and then removed after the procedure.

In the over 2,900 patients randomized in clinical trials, the Sentinel Cerebral Protection System has been shown to reduce the risk of stroke in the first three days after TAVR by more than 60 percent. Overall, the device was associated with a 70 percent relative risk reduction in stroke and death. Analysis of the filters demonstrated that debris, including 'tissue elements, artery wall calcification, valve tissue and other foreign materials' was found in filters in 99 percent of patients. MRI studies found a 44 percent decrease in new, post-TAVR ischemic lesions.

TriStar Centennial Heart and Vascular Center has adopted the use of the Sentinel Cerebral Embolic Protection device as a standard of care in those deemed high risk for stroke during TAVR. The risk of stroke is a reality of the TAVR procedure and the SENTINEL System has been shown to help reduce that risk. We are proud to be the first program in the region offering this therapy to our patients, which advances our mission of offering patients the latest medical technologies and the highest quality care.

We will continue to participate in the development of this and other like technology by sharing our data and outcomes with a national registry, and expect it to result in further improvements to our neurological outcomes for TAVR.