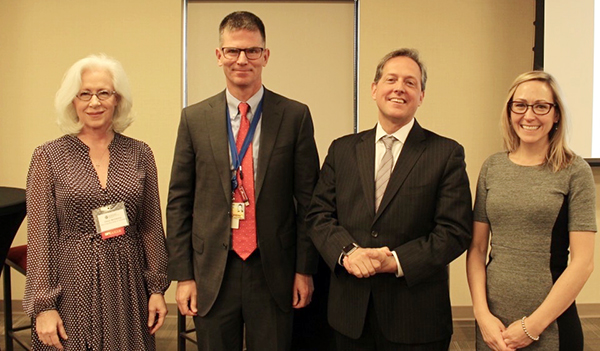 In late March, the American College of Healthcare Executives Middle Tennessee (ACHEMT) sponsored an educational luncheon involving a topic that affects every healthcare leader today: the opioid crisis. Tennessee ranks second in the nation for opioid abuse, and the event drew a record number of 131 registered attendees who heard from a variety of voices active in solving this epidemic.

The opening speaker was Commissioner Marie Williams, LCSW, of the Tennessee Department of Mental Health and Substance Abuse Services and chair of the Governor's Opioid Workgroup. Williams shared statistics from the Substance Abuse Treatment Group illustrating the variances among populations that seek out treatment for illnesses. She said 77 percent of those with hypertension, 73 percent of those with diabetes, and 11 percent of those with an opioid addiction will seek out treatment. Williams also drew attention to a National Institute of Health study that documented patients with asthma and hypertension relapse more often than those addicted to opioids. William's task force is working hard to change the popular attitude that addiction is a moral failure rather than a disease.

Elizabeth Ann Stringer, PhD, - neuroscientist, chief science officer and co-founder of Axial Healthcare - discussed JACHO assessments on pain and the catalyst for the epidemic. She also spoke about risk stratifying and "catastrophizing,"or the ability to cope, rating. Stringer emphasized the need for the government to bring multiple stakeholders together and highlighted some of the unintended consequences that can happen when policy is instituted into law. From a neuroscience standpoint, she also emphasized the importance of setting expectations according to a patients' ability to cope rating and recognizing that everyone's pain progression is different.

Jeff Guy, MD, vice president of Critical Care and Emergency Department services for HCA, brought a unique voice to the discussion. His prior experience as a burn and trauma surgeon was reflected in his concern regarding stigmatizing legitimate opioid prescription and use. He also shared that pain is the chief complaint in emergency rooms across the nation. Over 10 million patients per year are seeking treatment for pain through the ED. His framework of viewing the epidemic through treatment of underlying conditions, such as depression or bipolar disorder, looks to clinical effectiveness and tools of prediction, such as a history of trauma.

Bill Paul, MD, director of Metro Nashville Health Department, also spoke to a patient's trauma history, such as adverse childhood events, and a community's response to this. Financially, he pointed out the significant downstream costs of opioid addiction, such as HIV and Hepatitis C. He also made several other points concerning not marginalizing victims of the epidemic, decreasing the stigma, and teaching coping mechanisms in schools. Paul also spoke to expanding Medicaid to cover services and incorporating law enforcement, EMS and other stakeholders involved in keeping Naloxone readily available in emergency situations. Paul emphasized being "trauma informed" and teaching resiliency while decreasing silos and decreasing the separation of behavioral health from all other areas of medicine.

Justin Lanning called on his experience as CEO of 180 Health Partners and shared ideas on a "cortisol reduction programs" and coaching people to utilize healthier coping mechanisms. Lanning's emphasis is on decreasing the number of opioid addicted babies. He also spoke to adverse childhood events.

Lanning also issued a call to action involving three components. First, he said, was to provide appropriate expectations, including not emphasizing a zero out of 10 as the only acceptable pain management result but perhaps achieving a one or two out of 10 with a focus on the ability to adequately perform activities of daily living. Second, he said attention needs to be paid to helping those in need manage their stress. Third, he called for providing mentoring programs.

All of the expert panelists agreed that decreasing the stigma that separates opioid addiction from other medical illnesses is essential to solving this crisis. Setting appropriate expectations and reducing the opioid epidemic will take all stakeholders involved.