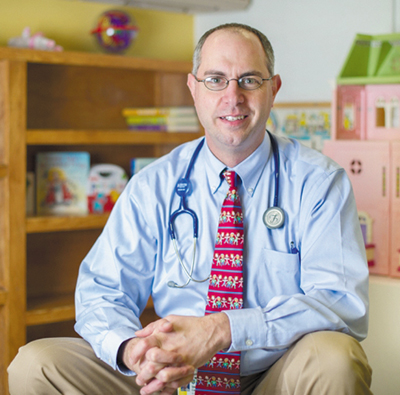 Six years ago, the U.S. Preventive Services Task Force (USPSTF) released evidence-based recommendations for screening and treating obesity in children ages six and older. Last month, a diverse group of 43 stakeholders published a consensus report showing those recommendations are still not being implemented with consistency.

A number of barriers to optimal care and potential solutions were highlighted in "Improving Access and Systems of Care for Evidence-based Childhood Obesity Treatment: Conference Key Findings and Next Steps." The paper, which published online Dec. 7 in the scientific journal Obesity, was led by the American Academy of Pediatrics (AAP) and The Obesity Society (TOS), with funding support from the Agency for Healthcare Research and Quality (AHRQ) and the AAP, to address what has become a national epidemic.

"With nearly one in three children in the United States with overweight or obesity, there is an urgent need to help these children get access to the evidence-based care they need to get healthy," said Denise E. Wilfley, PhD, lead author, professor at Washington University School of Medicine, and a TOS Fellow. "The consensus group was successful in identifying several barriers to care that impede widespread implementation of the USPSTF recommendation, including lack of health insurance coverage for treatment."

Co-author Stephen Cook, MD, FAAP, FTOS, an associate professor of Pediatrics with the University of Rochester Medical Center and Golisano Children's Hospital in New York, said the process began in July 2015 with a multidisciplinary conference. "We were able to bring together a lot of stakeholders from across the spectrum," noted Cook, who served as the meeting's co-leader with Wilfley. In addition to researchers and clinicians, he said attendees included representatives of state and federal policy organizations, professional societies, state Medicaid offices, private payers and large employer groups.

At the center of the USPSTF recommendations was a call for at least 26 hours of moderate to high intensity behavioral modification interventions. Cook, who is also the associate director of the AAP Institute for Healthy Childhood Weight, said getting kids into such programs and having those interventions be fully covered remains an issue.

Screening, he added, has come a long way. "When we asked physicians if they were screening (for obesity) in 2006, it was around 50 percent. That's become more consistent." In fact, he noted, with automatic plotting of height and weight, most physicians would almost have to disable computer programming not to see where a child falls on the growth curve. The Centers for Disease Control and Prevention defines childhood obesity as a BMI at or above the 95th percentile for children and teens of the same age and sex.

"So the question becomes when the doctor sees it, how comfortable do they feel in starting the conversation and do they feel empowered to do so," Cook asked.

Finding and paying for a multidisciplinary program remains a key concern. "'I don't have anywhere to send them. Internally, I'm not trained in behavioral modification, and I have nowhere to refer,'" Cook said is a familiar refrain.

"Now that healthcare is evolving, there are more options," Cook said. However, he noted, reimbursement remains an issue. In making the recommendations, the USPSTF hit on 26 hours as an average. "But the problem is there aren't really any studies or interventions that specifically say or deliver 26 hours, and there aren't really any protocols or studies for 26 hours. It's usually 35-50 (hours) in moderate-intensity studies or interventions," Cook explained.

That difference in the evidence-based behavioral modification protocols being used and what most insurers are willing to reimburse based on the recommendation leads to a payment gap, and Cook said that out-of-pocket difference is a very real barrier for many families.

Another issue is in how childhood obesity programs are crafted. While an individual provider can deliver the protocol, Cook said the setup of the program must take a multidisciplinary approach, incorporate the family, and include strategies to not only implement change but to sustain those changes.

Recently, the USPSTF did another review of the evidence to see if interventions were indicated for younger children or those with less severe weight concerns. Although the group concluded there wasn't enough evidence to expand their recommendations, they reaffirmed the original findings. "The current evidence is still true, and the higher the intensity, the better the benefit," Cook noted.

"The fact is that the U.S. Preventive Services has reviewed the data twice and found the evidence for the intervention is there. The hope is that pediatricians and clinicians through advocacy channels - whether through professional organizations, state societies or their health systems - advocate both for offering the evidence-based strategies and, at a state level, for reimbursement," he continued.

"Obesity is the most stigmatized disease in this country," Cook said. Yet, he concluded, not intervening appropriately during childhood means this chronic condition will continue to take a toll on individual health and the larger health system for decades to come.