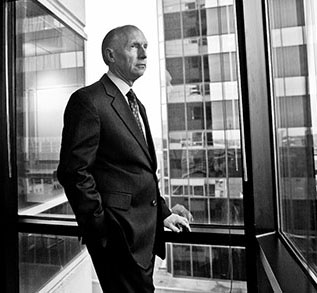 GS&P Leader Discusses the Benefit of a Holistic Approach

While it isn't a new concept that those working in healthcare design strive for aesthetically pleasing form to accompany a facility's critical functions, the rapidly changing care delivery landscape has caused many to re-think their value proposition, bringing an even larger, more robust skill set to the table.

James Bearden, AIA, executive vice president for Healthcare at Gresham Smith and Partners (GS&P), said it has been interesting to witness the changes in healthcare over the last few decades and to discern the trigger points that prompted those changes. "I anticipate there will be two or three more new things that come at us in the next few years," he said with a wry chuckle as everyone waits to see what direction healthcare reform takes next.

Bearden, who led Nashville-based GS&P for 13 years as chief executive officer, now serves as chairman emeritus for the company, which has more than 26 offices in three countries. The recent move - back to his healthcare roots - is part of the firm's long-term leadership succession plan. While Bearden's focus has shifted, his daily workload hasn't lightened. "About one-third of our company is healthcare work and services," he said.

The concept of value-added design began several years ago as GS&P crafted a 2020 strategic plan, Bearden explained. He said the firm began asking clients very specific questions about the challenges they faced. "It started allowing us to see what we might do with our work to help them be more successful," Bearden noted.

When looking for common elements that would be applicable to improve performance across the healthcare spectrum, Bearden said they came up with six key indicators - patient safety, operational efficiency, integration of technology, adaptability and resiliency, sustainability, and enhancing the human experience through evidence-based design.

The key, Bearden said, is to weave these tenets into the fabric of the project on the front end. "It's taking the processes and working with the staff within the physical environment and looking at it holistically," he explained.

For example, Bearden continued, to address the safety concerns surrounding patient falls, GS&P's multidisciplinary design team moves through the steps a patient would take - whether that's from the bed to the bathroom or down the hall to diagnostics. "It is literally putting yourself in the position of the patient," Bearden noted. In doing so, he continued, designers begin to think about physical proximity between points of service, walking surfaces, patient bed design, alarm systems, and assistive technologies.

Integrating technology has become a prominent consideration in facility design. Bearden said they have seen a significant increase in technology budgets over the last several years for many of their clients. "How do you turn that needed IT infrastructure truly into the building infrastructure and think about it the same way as you would for mechanical, electrical and plumbing?" he questioned. Considered essential elements, mechanical, electrical and plumbing features are designed into the building from the beginning. While IT needs used to be added in at some point down the design road, technology recently has made the transition to essential element. "It's really exciting to not only get it budgeted but to get it designed well," Bearden said.

Designing with operational efficiencies in mind has also become mission critical. "There's not any institution that I'm working with that isn't employing lean and Six Sigma into their basic operations," Bearden observed. Today, due diligence includes having departments sit down and think through their workflow.

"You actually have to take the processes into account first and then think about layout," Bearden stated. He added that an eye-opening exercise is to ask staff, "If the physical environment wasn't there, how might you be more effective in delivering patient care?" Really listening to the answers, he continued, informs innovative design.

"All these things now have to mesh together in order to work," Bearden said of creating an efficient, effective built environment. "One of the things I love about working at Gresham Smith is having multidisciplinary teams that allow us to address complex problems holistically." He added the different points of expertise and connectivity of the team brings about better solutions, which is essential in today's climate of change as care delivery continues to evolve.

"Healthcare institutions are looking at their return on investment for their capital expenses in a much shorter and shorter time frame," Bearden added. "It used to be about 20 years ... now it's five to seven years."

Because of that, he said architects and designers have moved away from creating rooms or departments for a single, specific use and instead are devising multifunctional areas that anticipate future uses through open-ended design. "Change is going to be inevitable," Bearden pointed out, "so the goal is to reduce future renovation costs by extending a department's lifecycle through adaptable healthcare design."

Ultimately, he said the goal is to incorporate all or part of the six defined value-added areas into a project as determined by each client. Equally important is thinking about how each of the areas impact staff, patient experience, and aesthetics. That thought process is woven throughout the project from the research phase to the design stage and three-dimensional modeling to implementation and construction.

"That, I think, is the secret sauce ... integrating it into the entire process," Bearden concluded.