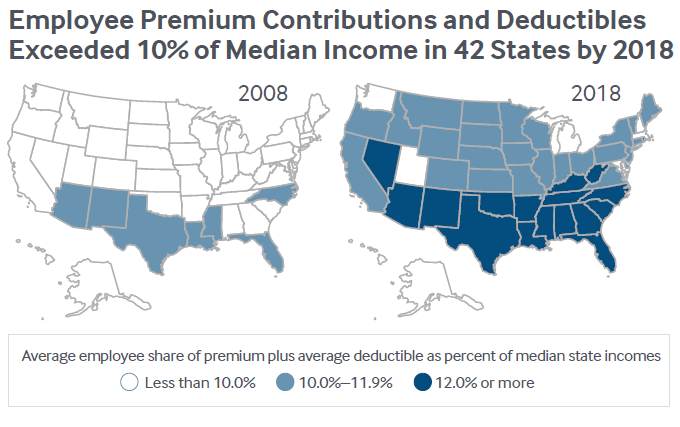 Many working families are spending more of their incomes on health care, a new Commonwealth Fund report finds. According to Trends in Employer Health Care Coverage, 2008-2018: Higher Costs for Workers and Their Families, that's because health insurance costs and deductibles have been growing faster than median income in all states over the last decade.

The report is part of the Fund's ongoing series looking at trends over the decade in the overall cost of employer health insurance. It provides a state-by-state analysis of how much insurance is costing workers in premiums, deductibles, and as a share of their income from 2008 to 2018.

Among the key findings from the report:

Workers' payments for health insurance grew faster than median income over the last decade. Between 2008 and 2018, employee premium contributions grew at an average annual rate of more than 4 percent, ranging as high as 6.4 percent between 2010 and 2012. This rise outpaced growth in median household incomes, which dipped to a low of -1.5 percent during the deep recession from 2008 to 2010 and more recently, from 2016 to 2018, was 3.4 percent.

For both single and family policies, the average total cost of premium contributions and potential spending on deductibles climbed to $7,388 in 2018 -- ranging from $5,815 in the District of Columbia to more than $8,000 in nine states (Arizona, Minnesota, Nevada, New Hampshire, New Jersey, North Carolina, South Dakota, Texas, and Virginia).

Rising deductibles leave workers and families exposed to high out-of-pocket costs. In many states, workers are saddled with high deductibles relative to their income. This leaves many at risk of being "underinsured" and more likely to struggle paying medical bills and more likely to skip care because of costs. The Commonwealth Fund defines underinsured as having a deductible equivalent to 5 percent or more of income.

In 18 states, average deductibles were 5 percent or more of median income and as high as 6.7 percent in Mississippi.

Workers' premium contributions consume nearly 7 percent of median income, up from 5 percent a decade ago. In 2018, employees contributed about 21 percent of overall premium costs for single plans and 28 percent of costs for family plans. But in some states, the share was higher -- as much as a third of family plan premiums, on average, in Louisiana, Mississippi, Nevada, North Carolina, and Virginia.

Sara Collins, lead author of the study and Commonwealth Fund Vice President for Health Care Coverage, Access, and Tracking
"Over the last decade, employer health insurance premiums and deductibles have grown faster than workers' wages. This is concerning, because it may put both coverage and health care out of reach for millions of people. Several simple policy steps, such as fixing the Affordable Care Act's family coverage glitch, have the potential to make health care more affordable for U.S. families."

David Blumenthal, M.D., Commonwealth Fund President
"The majority of people under age 65 in the U.S., 164 million, get their health insurance through an employer, and that insurance is less and less affordable for many of them. Ensuring that everyone can afford health insurance and health care will require policy fixes and systemwide efforts to get to the heart of the health care cost problem -- the exorbitant prices we often pay for health care in the United States."

The Commonwealth Fund report uses data from the federal Medical Expenditure Panel Survey-Insurance Component (MEPS-IC) to look at two trends in employer coverage over the last decade: how much workers are paying, on average, in premiums and deductibles, and the size of these costs relative to median income in each state. The MEPS-IC is the most comprehensive national survey of U.S. employer health plans, surveying more than 40,000 private sector employers in 2018. It had an overall response rate of 67.8 percent.

Total premium and other insurances costs are compared with median household incomes for the under-65 population in each state. Income data come from the U.S. Census Bureau's Current Population Survey (CPS) of households; analysis of CPS data performed by Ougni Chakraborty and Sherry Glied of New York University for the Commonwealth Fund.