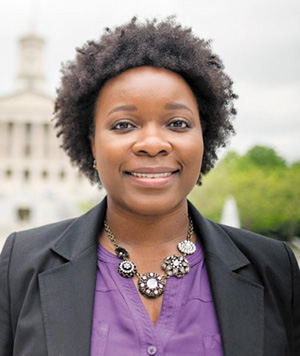 A bright legal mind, insatiable curiosity, empathetic nature, and true sense of purpose are a powerful combination. For Kinika Young, they are the driving force behind her desire to ensure all children have access to quality care.

A native of Montgomery, Ala., Young's desire to be a lawyer led her to Florida A&M University for a degree in political science followed by law school at Tulane. Attending a job fair in Atlanta during her second year, she met with a team from Bass, Berry & Sims, PLC, and said she was lucky enough to get an interview that led to a clerkship.

Returning to school, she recalled, "Hurricane Katrina happened the first week of classes my third year." Not only did the hiring partner at Bass call to check on her and offer a post-grad job, he helped arrange for her to attend Vanderbilt that fall to continue her studies. Young finished at Tulane in the spring before heading back to Nashville to begin her career at the prestigious law firm where she worked for more than a decade.

"My practice involved representing healthcare providers in medical malpractice lawsuits and then evolved into representing hospitals in managed care disputes," she noted. While she enjoyed the challenge of her work and knew it made a difference in the healthcare ecosystem, Young began to recognize a growing desire to have a more direct impact.

A trip to Cuba in 2013 as part of a delegation from the American Health Lawyers Association sparked her interest in health policy. "It was fascinating to learn how a country with very limited resources had prioritized healthcare and gained a reputation for training some of the best doctors in the world, made advancements in preventative care, and achieved some groundbreaking healthcare innovations," she said.

After becoming acquainted with the Tennessee Justice Center later that year, Young handled several pro bono cases for the organization and became a financial supporter of the nonprofit. When the opportunity later arose to work with TJC full time, Young happily accepted the new challenge.

"After seeing all the turmoil and civil unrest in 2016, I felt like I needed to devote more time to working on social justice issues and making a difference in people's lives," she said. "I was offered a position that focused on healthcare policy and advocacy as it pertains to children's health. I got involved in this area because protecting and improving programs that benefit children's health is one of the most important responsibilities we have to ensure the overall health of our nation."

With Congress reauthorizing the Children's Health Insurance Program (CHIP) for 10 years, Young said it's critical to ensure those who are eligible get enrolled. The new "Insure Our Kids" campaign, which was launched in conjunction with prominent partners including HCA and Monroe Carell Jr. Children's Hospital at Vanderbilt, looks to provide awareness of Tennessee programs and eligibility requirements and to assist in enrolling children and pregnant women in TennCare and CoverKids.

She credits TJC Executive Director and Co-founder Michele Johnson and Tennessee Commission on Children and Youth Director Linda O'Neal with serving as strong role models as she enters this phase of her career. "They are both forces of nature who've accomplished so much and helped so many people throughout their careers. Since I'm new to the advocacy field, I'm learning from people like Michele and Linda about how to move people and affect systemic change," Young said.

Her enthusiasm as a lifelong learner also extends to other countries and cultures. An avid traveler, Young had never stepped on a plane until she boarded a flight to Japan to be a counselor with Camp Adventure while in college. She returned the next summer as a counselor in Italy and later visited several countries in Europe as part of Tulane's International Arbitration Team.

She said friends frequently invite her to join them on their adventures. "Since I have 'fear of missing out,' I usually accept every invitation," she said with a laugh. Next up are South America and Antarctica ... the only two continents she has yet to visit.

Whether seeking out travel adventure or forging a new career path, Young is a big believer in blazing your own trail. She encourages creative thinkers and innovators to focus their talents on healthcare. After all, she noted, "We'll never see the change that is needed to make healthcare affordable and accessible to everyone if we play it safe and do things the same way they've always been done."