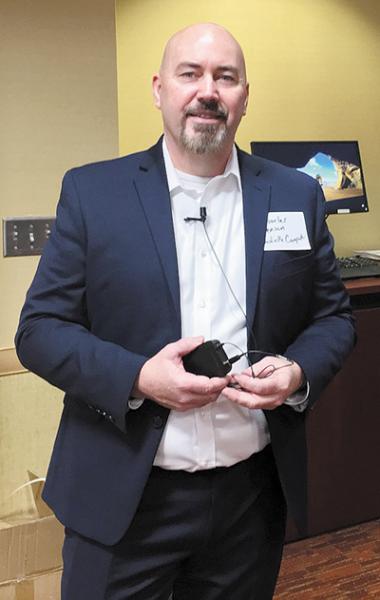 During the February meeting Charles Henson, managing partner with Nashville Computer, discussed cyberattacks and the best ways to prevent data loss. Henson said rich patient data made healthcare practices a hot commodity for the criminal underground on the Dark Web, which is a place where you can literally buy anything from identities and malicious software to drugs and guns.

He noted the encrypted content that exists on darknets cannot be accessed by traditional search engines. "The only way to get there is through a Tor Browser ... but don't do it," he cautioned. Simply accessing the Dark Web opens an individual up to hacking. If there is concern that stolen information might be on the Dark Web, Henson said it was best to hire experienced cyber security professionals to investigate.

The way information finds its way to the Dark Web, he noted, is typically through human error and human nature. Poor password choice is one of the biggest issues. Henson told the audience a list of 1.4 billion user names and passwords were recently found on the Dark Web in plain text. From that cache, 9.2 million people use '123456' as a password. Another popular password is 'password.' Cyber security, he noted, starts with strong password protection. Additionally, he said, passwords need to be completely changed once breached. "Hackers have tools to add millions of numbers at the ends of passwords so if you were Apollo12, don't become Apollo13," Henson said.

Ransomware remains popular, and the attacks have become much more targeted. Once information has been hijacked, it's a no-win situation. One Atlanta physician refused to pay ransom, so the hackers released data on a significant number of his patients. However, even if ransom is paid, the bad guys still have the information to shop it on the Dark Web.

Another ploy that is gaining in popularity is for a 'boss' to request private information, such as HR data, or money be sent to him or her quickly. Employees want to do the right thing, but Henson said it's critical to have smart policies in place. For example, he said a sound workplace policy should be: "One - I will never ask you to send sensitive information in an unencrypted format. And two - if I should ever ask for such information, you should talk to me on the phone prior to doing it."

Prevention, stressed Henson, is the best protection. He noted the FBI has said "95 percent of all breaches they work could have been prevented if the employee hadn't clicked on something, downloaded something, or had been educated on a policy." Henson suggested having your IT team do a little proactive spear phishing to see if your staff falls for some of the most common ploys. If they do, then use it as a teachable moment and to review company procedures.

Simple steps individuals should take include thinking twice before clicking on a link in an email, hovering the mouse over the sender's name to see the actual email address rather than the visible alias, being wary of any requests for personal information, looking for grammatical errors or random capitalizations, and recognizing that a promise of something that seems 'too good to be true' probably is just that. Other proactive steps a company or practice should take include having a password policy that locks someone out after three failed login attempts, using two-factor authentication, backing up files regularly, installing a spam filter to block at least some of the bad actors, and considering cyber insurance.

"Don't be an easy target ... be the hard target," Henson concluded. "Every layer of protection reduces risk."