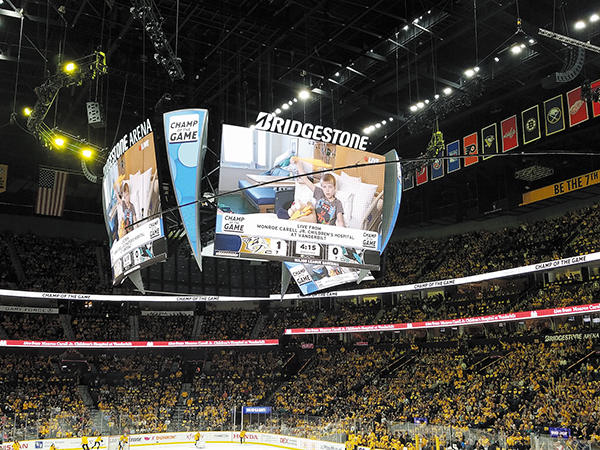 New this season, a Monroe Carell Jr. Children’s Hospital at Vanderbilt patient is featured on the jumbotron as a Vanderbilt Health Champ of the Game. 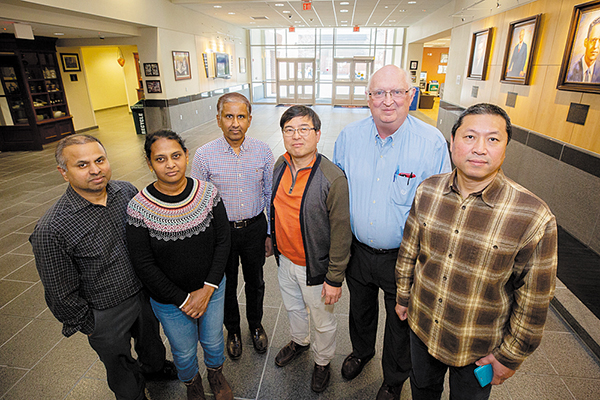 The Nashville Predators hockey team, longtime supporters of Monroe Carell Jr. Children's Hospital at Vanderbilt and its programs, recently presented the hospital with the proceeds raised throughout the year from the team's 365 Pediatric Cancer Fund.

The funds will be used to support pediatric cancer research, to identify new ways of curing childhood cancer and to deliver these treatments in an optimal way for each child.

The Predators organization also announced it will commit $300,000 over three years to support Children's Hospital's Soaring Higher, Dreaming Bigger: A Campaign Against Childhood Cancer. The campaign will help create the Pediatric Cancer Center at Children's Hospital by expanding and upgrading existing space as well as supporting research, training and programs.

Over the past eight years combined, the team has given more than $2 million in donations and in-kind contributions to the hospital and its programs.

As part of the 365 Pediatric Cancer Fund presented by Twice Daily, Rinne purchased a suite at Bridgestone Arena that accommodates 16 children and families from Monroe Carell Jr. Children's Hospital at Vanderbilt for all Predators home games. On select nights, the suite will be auctioned off, and 100 percent of the money raised will go to the fund. Throughout the 2019-2020 season, Rinne will continue to join forces with the Nashville Predators Foundation to raise money for the fund through Hockey Fights Cancer nights, special auctions and more.

The long-term pooled efficacy and safety results from the Phase 3 CheckMate -017 and CheckMate -057 studies showed significant difference in overall survival (OS) benefit with the use of the immuno-oncology therapy Opdivo. In this setting, Demonstrating a greater than five-fold increase in five-year overall survival rates, Opdivo's OS was 13.4 percent vs. 2.6 percent for docetaxel. The OS benefit for Opdivo-treated patients was observed across all subgroups.

The safety profile for patients treated with Opdivo was consistent with previously reported findings in second-line NSCLC, and no new safety signals were seen with extended follow-up.

David R. Spigel, MD, chief scientific officer and director of the Lung Cancer Research Program at Sarah Cannon and a partner with Tennessee Oncology, has been closely involved in the nivolumab research for several years and has co-authored papers, including this latest one, regarding the use, duration and efficacy of the immunotherapy as a treatment for aNSCLC..

On the prevention side for lung cancer, a diet high in fiber and yogurt is associated with a reduced risk for lung cancer, according to a study by Vanderbilt University Medical Center researchers recently published in JAMA Oncology.

The benefits of a diet high in fiber and yogurt have already been established for cardiovascular disease and gastrointestinal cancer. The new findings based on an analysis of data from studies involving 1.4 million adults in the United States, Europe and Asia suggest this diet may also protect against lung cancer.

Participants were divided into five groups, according to the amount of fiber and yogurt they consumed. Those with the highest yogurt and fiber consumption had a 33 percent reduced lung cancer risk as compared to the group who did not consume yogurt and consumed the least amount of fiber.

Shu said the health benefits may be rooted in their prebiotic and probiotic properties. The properties may independently or synergistically modulate gut microbiota in a beneficial way.

Our Mission in Motion (OMIM) has screened more than 21,000 women at 1,420 events since 2011. OMIM prioritizes uninsured, low-income women in historically underserved communities. The new funding will enable OMIM to provide more than 500 free mammograms in a one-year period to women in 11 of the 42 counties in Komen's Tennessee service area. This grant focuses on uninsured African American and Hispanic women.

"Saint Thomas Medical Partners and Our Mission in Motion continues its strong partnership with Susan G. Komen Central Tennessee," said Yvette Doran, president and CEO of STMP. "These grants support our ability to serve more women across Tennessee and enable us to bring potentially life-saving mammograms to many women who might otherwise not be able to care for their health."

Nearly five years after beginning their research, investigators from the University of Tennessee Health Science Center (UTHSC), with collaboration from scientists at Oak Ridge National Laboratory (ORNL), have developed what they believe will be a next generation treatment option for advanced prostate cancer.

The journal Clinical Cancer Research published a paper on the findings online last month. Ramesh Narayanan, PhD, an associate professor in the Department of Medicine-Hematology in the College of Medicine at UTHSC, is the principal investigator on the project. Duane D. Miller, PhD, professor emeritus in the Department of Pharmaceutical Sciences at UTHSC, is a co-principal investigator on the research.

The UTHSC team identified a novel molecule that binds to the androgen receptor (AR), the receptors for the hormone androgen that fuel prostate cancer growth. This molecule, UT-34, developed at UTHSC and mechanistically studied and defined with the scientific computing capabilities at ORNL, has shown to not only slow the growth of tumors in pre-clinical models, but to shrink them to undetectable size. Vera Bocharova, PhD, and Bobby Sumpter, PhD, directed the work at ORNL.

According to the paper, "this provides the first evidence of the potential of an orally bioavailable AR degrader in advanced prostate cancer." The findings were validated by an outside contract research firm.

Approximately 18 million individuals are living with prostate cancer today, noted Narayanan. That number is expected to grow to 22 million by 2024. "You have an enormous number of prostate cancer patients, and under current therapies, these patients respond only for a brief period," he said. "Most pharma companies are trying to find the next generation of treatment for advanced prostate cancer."

He added UTHSC has achieved a milestone by identifying these lead molecules. The next milestone would be the clinical trial process, which he estimates could commence in 12 to 24 months. Depending on those results, a drug could be available in three to five years.

New guidance from exercise oncology experts recommend systematic use of an "exercise prescription" by healthcare workers and fitness professionals in designing and delivering exercise programs that aim to lower the risk of developing certain cancers and best meet the needs, preferences and abilities of people with cancer. The American College of Sports Medicine (ACSM) convened the roundtable of experts from 17 partner organizations, which included the American Cancer Society and the National Cancer Institute--part of the National Institutes of Health, to review the latest scientific evidence and offer recommendations about the benefits of exercise for prevention, treatment, recovery and improved survival.

"With more than 43 million cancer survivors worldwide, we have a growing need to address the unique health issues facing people living with and beyond cancer and better understand how exercise may help prevent and control cancer," said ACSM Immediate Past President Katie Schmitz, PhD, FACSM, who co-chaired the roundtable. "This esteemed, multidisciplinary group of leaders on the forefront of exercise oncology aimed to translate the latest scientific evidence into practical recommendations for clinicians and the public and to create global impact through a unified voice."

"These recommendations are designed to help cancer patients incorporate physical activity into their recuperation, and they're an important reminder that all adults should strive to be as physically active as their abilities allow for cancer prevention," said Alpa Patel, PhD, senior scientific director of epidemiology research at the American Cancer Society.

The new evidenced-based guidance and recommendations include:

To implement the recommendation for translating evidence into practice, ACSM and its Exercise is Medicine (EIM) initiative also introduced a new program, Moving Through Cancer. The clinician-focused program aims to ensure that all people living with and beyond cancer are assessed, advised, referred to and engaged in appropriate exercise and rehabilitation programming as a standard of care. Resources are available for oncology clinicians and patients, including a global, searchable registry of exercise programs at www.exerciseismedicine.org/movingthroughcancer.