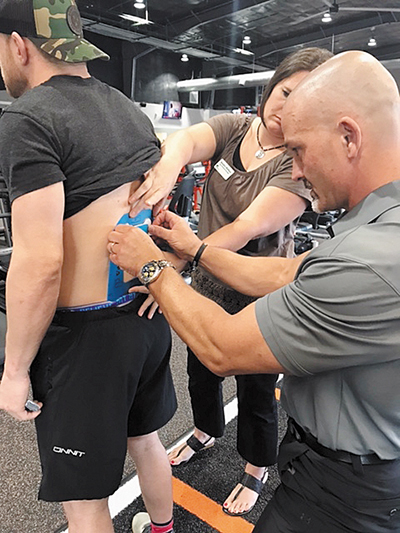 It's news no athlete wants to hear ... a torn anterior cruciate ligament most always means the season is instantly over with surgery and months of rehab to follow.

"The scope of the problem is there is anywhere between 250,000 to 300,000 ACL injuries every single year," said Trent Nessler, PT, MPT, DPT, the founder and developer of the ACL Play-It-Safe Program™. "Right now it's about a $5 billion healthcare cost for the primary injury only, and 79 percent of those who tear their ACL will have osteoarthritis within 12 years," he added of the impetus to identify and reduce risks.

For athletes at the high school, collegiate and professional level, an ACL injury comes with long lasting effects, including increased risk of re-injury. Nessler noted a study published earlier this year that focused on NFL players with torn ACLs found athletic performance was reduced for up to two years after the athletes returned to play. "In addition," he said, "they reduce their professional career by two years on average." Nessler also noted ACL injuries have a high re-injury rate of 20-30 percent within two-five years after primary reconstruction.

Nessler - who is based in Nashville and is the national director of Sports Innovation for Select Medical, one of the largest rehabilitation companies in the nation with 1,600 centers across the United States and more than 800 athletic trainers on staff -said the vast majority of ACL injuries don't happen as the result of a direct hit. He pointed out 70-80 percent of ACL injuries are non-contact, typically occurring when a rapid change of direction ruptures the ACL.

His quest to create an effective ACL injury prevention program began 18 years ago when he had a physical therapy practice in Phoenix, Ariz. In a fairly short span of time, Nessler had 21 kids come to his office to rehab torn ACLs. "I was seeing certain patterns that I knew intuitively were putting them at risk for re-injury," he recalled. "I knew if I could assess it, I could treat it."

Nessler began videotaping specific movements including a single leg squat and single leg hop. "If an athlete's knee moves in towards midline too much, we knew that was a risk factor. We suspected that if the knee had major movement, faster, there was greater risk."

To quantify the magnitude of movement, Nessler's research led him to dorsaVi™ , an Australian company that makes wearable sensor technology. "We basically integrated our movement assessment with their technology," Nessler said of the partnership that led to ViPerform AMI™ - the 3D wearable technology now used for the ACL protocol.

Over time, the assessments have grown to include a number of additional exercises to gauge quality of movement on both the left and right sides. "In total, the test consists of 83 reps and three vertical tests. It's very physically challenging, but we're testing athletes," he said. The idea, Nessler continued, is to see how the athlete moves when fatigued since many non-contact ACL injuries occur as the athlete tires.

The wearable technology allows trainers to evaluate an athlete's movement and put them on a strength and conditioning protocol from level one to four ... with four being for athletes who move really well and level one for those with the highest risk of injury due to engrained patterns of incorrect movement.

"When you improve the biomechanics of the lower kinetic chain, what you see is the kinetic energy transfer across the system is much better," Nessler said. "When we identify those athletes who are at greater risk and put them on the program, we found we not only reduce ACL injuries but all non-contact lower extremity injuries - ankle, knee, hip and low back," he continued.

Even the best movers have benefitted from the exercise protocol and seen enhanced vertical jump and sprint speed, both measures of explosive power that are particularly appealing to athletes. Nessler said improving performance also prevents injuries to create a win/win for athletes and coaches.

Having been around sports medicine his entire career, Nessler knew it was key to keep the protocol short. "If a program is greater than 20 minutes in duration, coaches won't do it," he noted. ACL Play-It-Safe incorporates a five-minute warm-up followed by the normal practice led by the coaching staff and then about 15 minutes of a series of seven exercises specific to the Play-It-Safe level assigned to each individual athlete.

Other unique attributes include having a video, which is available via an app tied to the program, to show exact technique for each movement at every level. "It creates a standardized instruction in the individual exercises," Nessler said. Each athlete also has their own equipment that comes in their personalized bag so that someone at one level doesn't grab a stability trainer, cuff or resistance band meant for someone at a different level.

"To date, we've done over 8,000 assessments nationwide on athletes and put over 4,000 kids on the ACL Play-It-Safe Program," Nessler said. Despite amassing plenty of field evidence the program worked, he recognized the need to study the impact of the program in a more methodical way.

To measure data and quantify outcomes, Nate Bower, PT, DPT, SCS, served as lead physical therapist in the ACL Play-It-Safe study with the women's soccer team at Samford University in Birmingham, Ala. 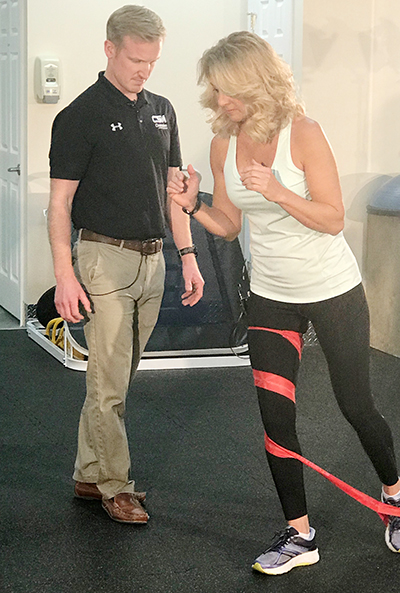 Nate Bower works with an athlete.

Bower, who is residency trained and a board-certified clinical sports specialist, serves as market manager for Champion Sports Medicine, part of the Select Medical Outpatient Division. He noted that over the last five years, the soccer team had averaged three to four ACL tears per season. "That's pretty high when considering the team has about a 20-woman roster," he said. "The athletic trainer came to me and asked, 'Do you know of any programs we can implement now to hopefully prevent these injuries in the future?' That's essentially where we started."

He added the ACL Play-It-Safe protocol focuses on strength, flexibility, balance and plyometrics. "All of the exercises are targeting areas that should be part of any injury-prevention program," Bower pointed out. Working closely with the athletic trainer, he said the first step was to get a baseline performance measure on each specific movement test in July 2017, about six weeks prior to the start of the soccer season. After identifying areas where there was room for improvement, such as poor landing mechanics, the athletes were assigned to a level and provided education to improve areas of weakness throughout the season.

Two of the key metrics being studied were any reduction in injuries and time lost from competition and practice. "A third thing we wanted to see is if we were able to reduce the medical cost associated with these injuries," Bower noted.

During last year's season, there was one ACL contact injury. "We did not see any non-contact ACL injuries," said Bower. "As far as lower extremity injuries, we saw a 50 percent decline. As for the amount of time loss from these injuries compared to previous years, it was 40 percent less, and there was almost a 40 percent reduction in medical costs."

While the data collected to date bears out what Nessler envisioned when he developed the program, there are more questions to be answered. Bower said the goal is to enroll another 100-120 athletes at the Division I level. "The soccer study is still ongoing. We want to collect long-term data. The second cohort of the Play-It-Safe protocol was just implemented," he said. "In 2018, movement testing was done for women's volleyball, women's basketball, and men's basketball," Bower added of additional baseline assessments at Samford.

In addition to long-term ACL outcomes, Bower said a future goal is to ascertain whether or not an assessment score is predictive of on-field performance or if there is a correlation to risk for injury.