The (Flight) Path to Medicine 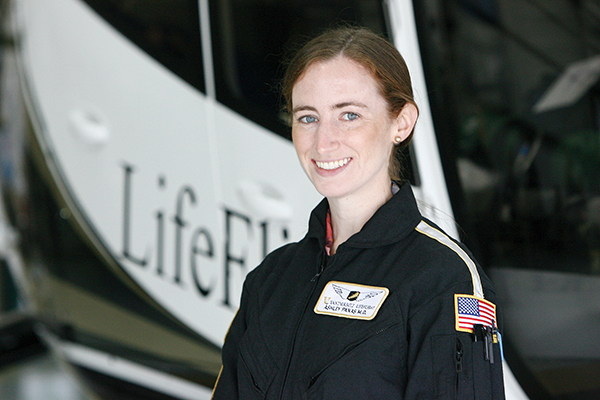 Ashley Panas Takes her Love for Emergency Care to the Skies

Ashley Panas, MD, is taking her passion for medicine to new heights. Now in her seventh year as assistant medical director for Vanderbilt LifeFlight, Panas is helping to grow a transport program that's touching the lives of patients and providers throughout the Southeast.

A native of West Virginia, Panas followed in the footsteps of her grandfather, a general practitioner in their small town of Kingwood. "He died when I was young, but I grew up hearing stories about him going out during the night to deliver babies," Panas recounted.

In college, she fell in love with hospital care and emergency medicine while volunteering as an EMT for a local rescue squad. Panas received her undergraduate degree from Washington and Lee University in Lexington, Va., before earning her medical degree from Wake Forest School of Medicine in Winston-Salem.

In 2010 she arrived at Vanderbilt University Medical Center for an emergency medicine residency. She completed an EMS fellowship while in Nashville before heading to the University of Wisconsin, Madison - one of the only flight fellowship programs in the nation.

"I'd always wanted to fly but had never had the opportunity," said Panas, who had done a LifeFlight ride-along as a second year resident at VUMC. "I wanted to fly as a crew member but most flight teams in the U.S. don't have a physician on board."

While in Wisconsin, Panas trained under seasoned flight physicians, learning to adjust to challenging time and space constraints - the greatest obstacles of practicing in-air.

"When I see a trauma patient at Vandy, I've got 10 other people in the bay to help me, so there's a lot of hands to help me get things done in a timely fashion," said Panas. "In an aircraft, it's you and your partner, and the confined space is a challenge but is also something I love - prioritizing what needs done now, and what can wait till the hospital."

She continued, "It's challenging to shift your mindset and think in a different way than I'm used to on the ground." Working in sweltering summer temps is another challenge for crew members, who spent this high-trauma summer in N95 masks in addition to flight suits.

Vanderbilt LifeFlight first took off in 1984 and has completed more than 45,000 patient missions and counting. Since the program's inception, there has been tremendous growth expanding from a single helicopter to eight bases across Middle Tennessee.

The LifeFlight team celebrated its 35th year in 2019, and in July added nurse practitioners and physicians to their expanded flight crew at several bases. (See sidebar/page xx). "A lot of members have had advanced degrees for a few years but no mechanism to put that to work while on job as a flight nurse," Panas explained. "This is something management has been working toward over the last few years."

Panas said physician interest in the LifeFlight program has grown in recent years, as well, with seven physicians now on the crew. "There used to be maybe one interested resident a year who would fly," Panas said. "Over the last few years, we've had some staying, so it's been neat to watch that grow." She attributes part of that growth to awareness, as residents and physicians who had never considered the possibility see other physicians take to the skies.

"I'm biased and think it's the greatest job in the world," said Panas, who looks forward to sharing her love of flying with her one-year-old daughter. Still, she recognizes air medicine isn't for everyone - especially those with a fear of flying or with a family, since flight physicians spend an average of 36 hours in the air each month in addition to their hospital duties.

Panas looks forward to watching the program continue to grow. Recent additions include growth of the Event Medicine team as well as LifeFlight's Critical Care Ground Program - a high tech ambulance larger than a traditional vehicle but with similar medical capabilities as a chopper. "The whole team can sit up front and have a ton of room in the back, as well," Panas said, noting the challenges of transporting patients on an ECMO or balloon pump in a traditional ambulance.

Currently the ground trucks run two 12-hour shifts each day, focusing on transport between hospitals, as well as picking up patients hours away. Like LifeFlight's fleet of nine helicopters and one airplane, their ground trucks are available to patients at any hospital.

"We serve the entire community, wherever the patient is going," said Panas. "That's important during times like this, when hospitals are crowded and patients need shifted to get the best care. We have some of the best pilots and mechanics in the world, and I literally trust them with my life," Panas concluded.