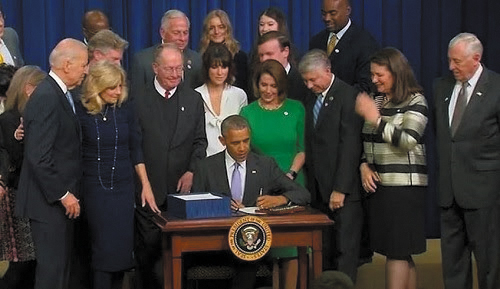 Editor's Note: U.S. Senator Lamar Alexander (R-Tenn.), who chairs the Senate Committee on Health, Education, Labor & Pensions (HELP), shared his thoughts on the recent passage of the 21st Century Cures Act, which was signed into law on Dec. 15, 2016. Enjoying broad bipartisan support, the Senate passed the measure 94 to 5, and the House passed it 392 to 26.

This $6.3 billion bipartisan law will help us find cures for cancer, fight opioid addiction, treat mental illness, and better understand the brain to prevent diseases like Alzheimer's. It will help take advantage of this remarkable time in biomedical innovation, spur treatments and cures from cancer to rare pediatric diseases, and help move those treatments and cures more efficiently into medicine cabinets and doctors' offices, while maintaining our gold standard of safety.

I've worked on this bill for two years as chair of the Senate health committee. Working with the senior Democrat Patty Murray (D-Wash.), we held 12 hearings, led five working groups, and passed 19 pieces of bipartisan legislation that formed much of the policies in this bill.

Working with our counterparts on the House health committee - Chairman Fred Upton (R-Mich.), and Democrats Frank Pallone (D-N.J.) and Diana DeGette (D-Colo.) - we also put together a surge of funding to help make dramatic strides in cancer treatments, to help advance our understanding of the brain and Alzheimer's, and to help achieve the promise of precision medicine, or specific, individualized treatments tailored to each person's unique genome and environment.

Dr. Francis Collins, the head of the National Institutes of Health, has made "bold predictions" about the breathtaking advances to expect during the next decade from medical research: an artificial pancreas to treat diabetes, vaccines for HIV/AIDS and Zika, a universal flu vaccine, non-addictive pain medicines, a heart built from a patient's own cells, and early detection or even prevention of Alzheimer's.

Especially important for Tennessee, the bill will provide $1 billion in grants to states to help fight the opioid crisis. The new law also will help the one in five adults in this country who suffer from a mental illness get the treatment they need by the making the largest reforms to major mental health programs in a decade.

It also takes a significant step to help more Americans take advantage of regenerative medicine, which the Mayo Clinic has described as a "game-changing area of medicine with the potential to fully heal damaged tissues and organs." Nashville resident Doug Oliver has been an advocate for regenerative medicine. Doug was blind for more than a decade before doctors used stem cells from his hip and injected them into his eye and miraculously restored his sight. He has traveled to Washington multiple times to share his story and even helped my staff craft pieces of this legislation.

Former Senate Majority Leader Bill Frist of Tennessee has worked for two years with the Bipartisan Policy Center to help advance the legislation. 21st Century Cures will modernize the Food and Drug Administration. While biomedical research is making today one of the most exciting times ever in the field of medicine, our federal review and approval process takes too long and costs too much. The bill improves electronic health records to reduce the documentation burden for doctors and make it easier for patients to access their records and for doctors and hospitals to get the information they need to treat patients.

All these pieces will work together to help improve the lives and health of virtually every Tennessee family. That's why this new bipartisan law is a Christmas miracle.