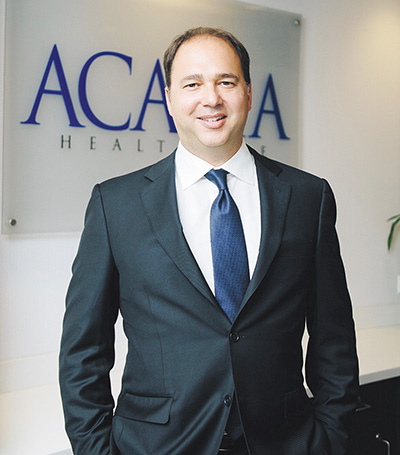 The road to medicine was seemingly inevitable for Michael Genovese, MD, JD, chief medical officer at Acadia Healthcare, the publicly traded developer and operator of behavioral health facilities that is headquartered in Middle Tennessee. His journey, however, was less than typical.

Raised on Long Island by a physician father and nurse mother, healthcare was simply in Genovese's genes. "In the 1970s, Dad would take us to the hospital and introduce us to patients, sit on the bed and talk about football, then start the exam," he said. "It was really cool to see that interaction, and I've always had a lot of respect for doctors and nurses."

But life at the University of Pittsburgh brought new interests, and the English major headed to his alma mater's School of Law with plans to focus on medical malpractice. "It's easy to make good medicine look bad, and New York was such a litigious state," he said. "I wanted to defend those doctors." Following graduation, the junior partner found himself frequently researching medical conditions for his firm's senior partners - and enjoying it.

Before long, Genovese was pursuing medicine and training at the University of Connecticut, where he completed a residency program in psychiatry. In 2015 he completed a fellowship in child and adolescent psychiatry at New York School of Medicine/North Shore University Hospital in Manhasset N.Y.

"When I was choosing residency programs I thought I'd do internal medicine and cardiology like my dad, but there was a lot of interesting crossover between law and psychiatry," he said. "So many patients are being involuntarily committed, and there was nowhere else in society where we hold someone without due process. I feel like the mind is the most interesting part of the patient."

Back in Long Island, Genovese opened a general psychiatry practice focused on mood and anxiety disorders, but he soon stumbled into the world of addiction medicine. "I had a patient who was a teacher and a great guy but was addicted to Oxycontin," Genovese said. "He had seen several doctors and done everything he could, and was at risk of losing everything he had."

Genovese knew of a medication that might offer hope, but he couldn't find an addiction specialist in the county accepting new patients. Ever innovative, Genovese decided to obtain the prescription waiver and treat the patient himself. Soon, the former attorney was working six days a week as Long Island's sole "de facto addiction doctor."

After referring multiple patients to Sierra Tucson Recovery Center (now an Acadia Healthcare facility), the company presented Genovese with an opportunity to reach more patients on a larger scale. In 2016 he accepted the role of chief medical advisor over Sierra Tucson's Recovery Division.

Now with a global platform, Genovese is even more passionate about the delivery of psychiatry and breaking stigmas. Through education of medical providers, the public, patients and their families, Genovese hopes to spread awareness that treatment of mental illness or addiction is no different than treatment of illness or injury.

"Psychiatry is a part of healthcare, and we shouldn't look at mental health as something different since your brain is an organ, like your heart or lungs," he said. "A policeman shouldn't be afraid to go to the doctor because he can't un-see something he saw on the street. That's an injury, and it needs treatment."

He also hopes to change minds about the addiction recovery process. "Some people think medications are only a treatment and don't really represent recovery, and there needs to be education around that," he said. "That's like saying if you're taking insulin for diabetes you're not doing a great job managing it and assuming you're not exercising. There needs to be more coming together around addiction medicine."

Genovese also wants to create awareness of the need for more options in medical therapy for addiction: There are currently three medications available for substance abuse, and nothing for meth and cocaine addiction. "There's been this thought that addiction is a moral failure, and you need to pull yourself up by the bootstraps," he said. "Fortunately, more and more people are seeing and hearing the neuroscience behind it and recognizing that addiction really is a disease. Psychopharmacology is so sophisticated and we can do so much to treat people with mood disorders and substance disorders. I'm glad I chose this path."