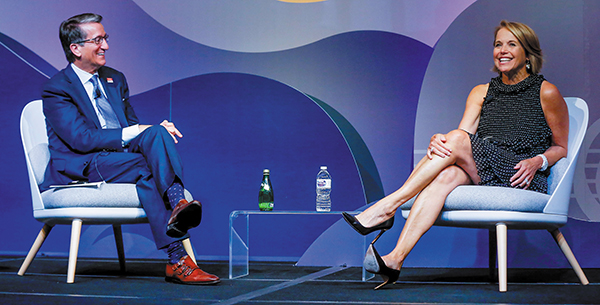 On Aug. 14, Donato Tramuto, CEO of Tivity Health and co-founder of Health eVillages, welcomed nearly 250 attendees to the Omni Nashville Hotel for the Third Annual Connectivity Summit on Rural Aging. The 2019 programming focused on demystifying the social determinants of health through two days of panel discussions, fireside conversations, interactive roundtables and shared stories.

Launched in 2016, attendance at the conference has grown three-fold as diverse stakeholders gather to address the formidable barriers impacting an aging population. The MIT AgeLab and Jefferson College of Population Health joined Tivity and Health eVillages in hosting the 2019 summit.

"Tivity Health is uniquely positioned to address critical health factors for seniors, including inactivity, food insecurity and social isolation and loneliness," said Tramuto. "Our annual summit serves as a driver for change and a forum for key stakeholders to engage to spark innovation and strengthen existing solutions to support those aging in rural areas."

On day one, award-winning broadcast journalist and author Katie Couric joined Tramuto for a fireside conversation on pressing issues facing seniors and the larger community. Calling loneliness a national crisis and the new "chronic condition of the 21st century," Tramuto said technology and human mobility have exacerbated the issue for many rural seniors as children move away to urban areas and technology replaces face-to-face interaction.

Couric noted she is currently exploring the idea of a documentary on social isolation and the lack of community that crosses age and geographic boundaries. Asked if she'd ever felt lonely, Couric quickly responded, "Of course I've been lonely!" She said she lost her husband at the age of 41 and experienced both profound sadness and loneliness in the aftermath, but she added lonely experiences also happen in personal and professional moments throughout life.

In the wake of her husband's death from colon cancer, Couric famously helped break down taboos and start a conversation by undergoing a colonoscopy as part of her national morning show. Just by telling people's stories, she said it's possible to spark change. "I think people want to have an emotional connection, and they're craving it," Couric said. "I think step one is talking about it, and step two is giving people hope."

Readily admitting to being a 'Pollyanna' even in a historically divisive time, Couric said she thinks hope is happening on a grassroots level, particularly as people are losing faith in big institutions. "People are instead going into their communities and saying, "Where can we change things in our own backyards? We can't wait for the government to fix all our problems. We need to actually step up and create solutions ourselves.' I find that to be an incredibly important development, and it fills me with hope," she stated.